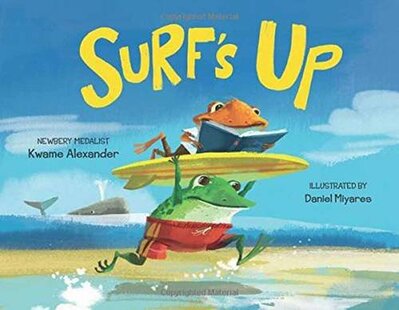 Surf's up! Not yet, Dude! Books are boring! Not this one! Bro and Dude have very different ideas about how to spend the day at the beach. But as Bro continues to gasp and cheer as he reads his book (Moby Dick), Dude can't help but get curious. Before you can shout 'Surf's up!' both frogs are sharing the same adventure, that is, until they get to the beach. Newbery Award Medal Winner, Kwame Alexander, and Daniel Miyares have joined forces to give little listeners a wild ride.

"Working in saturated colors and boldly graphic textures, he [Miyares] sends these big-eyed, freaked-out frogs hurtling (often literally) between fantasy and reality. It’s a wild ride on the sea of imagination, and a rousing high-five to the power of reading."- Publishers Weekly, Starred Review

"Newbery Award winner Alexander's humorous, tautly poetic dialogue between friends begs to be read aloud to small listeners or by new readers, and these frogs have cultural punch that many plain-vanilla animal characters lack. The nod to Moby-Dick is a bonus. A warmhearted tribute to reading." -Kirkus Reviews, Starred Review